Enjoy VR on your website without breaking the bank.

Most of the time, VR (virtual reality) is associated with 360-degree videos. Yet in many cases, 360 photos are more effective and easier to use for VR. The frame is frozen but just as interactive.

We will not list all the reasons (we have already done this) that lead us to favour VR with static images for most websites (tourism, cars, construction...), but we can say in summary that today, 360 photo is visually better than video and much less constraining to produce and display. To not slow down your site and enjoy VR that will boost your business (PwC says that it works), you should probably use 360 photos.

If you want to create a VR player for desktop and mobile, here is the procedure:

The difference between 360 photos and classic photos is the "equirectangular" rendering (they look like this). You can take 360 pictures with one of the many 360° cameras available and now very affordable. If needed, here are some tips for taking beautiful pictures. The output format of the file is most often a jpeg, like a classic photo.

You need to upload your photos on a specific website to view them in a VR player and share them or integrate them into your website. A 360° photo without a viewer is useless.
-> 360player lets you upload your images, view them and share them instantly with your customers or on your website. It's free without time limit. Press the "carboard" icon on the player to switch to VR mode. 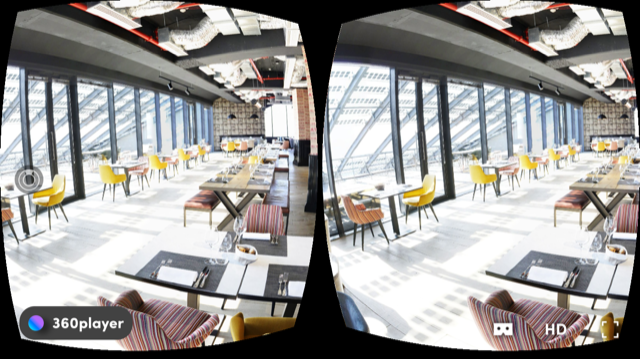 A VR viewer is a considerable asset for many businesses who wish to dive their customers in a remote (and static) place: hotel room, car cabin, boat cabin, house, apartment... the cases are very numerous for which 360 video is useless and 360 photo has only advantages.